It’s legal to go naked in Brattleboro but we decided to ride with our clothes on.

We had a big climbing day today.  In some ways, it reminded us of the early days of the ride, back in Oregon.  We had one long climb — 13 miles on my odometer — and a lot of smaller climbs.  Like yesterday, we had lots of rolling hills — long ups followed by long downs.  In total, we climbed 6,100 feet through the Green Mountains of Vermont. However, Brattleboro is only 279 feet higher than Latham.  So, in addition to 6,100 feet of climbing, we must have had 5,821 feet of descents.  In other words, some hard miles and some very easy miles, just like Oregon.

Now we’re in Vermont which is very pretty, very 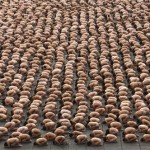 green, and very quirky.  Brattleboro not only permits nudity but it’s also one of the few certified free trade towns in the United States.  Brattleboro also indicted George Bush and Dick Cheney for “crimes against the Constitution”. Apparently there’s still a warrant out for their arrest.  I wonder if they would be arrested if they showed up naked.

Brattleboro is also the oldest town in Vermont, which has a few quirks of its own.  Among other things, it was the home 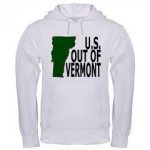 of Ida May Fuller.  Don’t remember her?  She received the first Social Security check ever.  Vermont also has the only state capital — Montpelier — in the Union that does not have a McDonald’s.  It does have a lot of Ben & Jerry’s though. Where does all of Ben & Jerry’s cream come from?  Well, Vermont has the highest ratio of cows to people of any state in the country.  Vermont’s a little weird which is why I’m looking for the t-shirt that says: U.S. Out of Vermont.

Ooops, I’ve gotta go.  Tucson Terry has organized a nude fun run for us and I don’t want to miss it.