Quick.  How many gallons of sap does it take to produce one gallon of maple syrup?

When I worked for J.D. Edwards, I would visit our offices in Brussels every now and then. On every visit, I got lost.  After half a dozen visits, I complained to one of my Belgian colleagues — that the city and its road signs were very confusing.  He was not sympathetic: “Do you know how many times we’ve been invaded?  We don’t want you to know where you are.”

New Hampshire has a similar feel.  Apparently, the state is too poor to afford street signs so it’s very difficult to tell what road you’re on, much less where you should turn.  In the town of Keene, we were supposed to turn left on Main Street and then right on Washington Street. Damned if we could ever find a sign that said Main Street. So three other riders and I wound up making a five-mile mistake.  We call them “bonus miles” — we’re reducing the overall cost per mile.

The route consisted of lots of ups and downs — no big, long hills, but hundreds of small ones.  Every turn introduced a new 100- or 200-yard hill.  Then it was down again, only to climb again after the next turn.  After four hours of ups and downs — and no road signs — we were all just annoyed.  On the other hand, most everything else was great.  We had perfect cycling weather — cool and cloudy. The roads 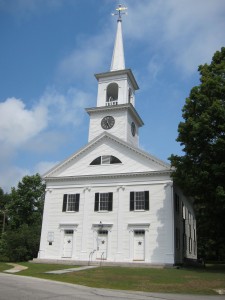 were nice; the shoulders were exceptionally good. And the scenery — forests, small rivers, pretty little villages, and factories from the Revolutionary era — was exceptional.

With our national elections only 14 months away, I was expecting to see presidential candidates lurking behind every tree.  No such luck — apparently they’re preoccupied in Iowa.  However, I did just speak to Suellen.  She had a four-hour flight from Denver to Boston and sat by a Sarah Palin impersonator.  Sounds like she has lots of good stories to tell.

So now we’re in New Hampshire, where the first potato in the United States was planted in 1719. We have one more day and less than 50 miles to the Atlantic — where we’ll dip our front wheels to complete the coast-to-coast marathon. Better yet, Suellen arrives in a couple of hours.  I’ll get back to you tomorrow.

It takes 40 gallons of sap to produce one gallon of maple syrup.