It’s been almost a month, we’re back in Denver, and I’ve gained back exactly one pound. I’ve been working out with Alison, my trainer, but not riding a lot.  As for fund raising, 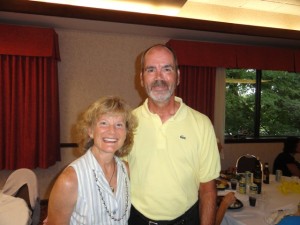 you’ve been very generous and given more than $31,000 or $8.37 per mile.  My goal was $10 a mile or $36,670 (based on the official mileage).  So, I’m a little short … but I’m going to rationalize that six newspaper interviews, five TV interviews and two radio interviews are worth at least $6,000 — so with “soft” dollar contributions, we’ve reached the goal.  (If anyone wants to give a few more “hard” dollars, just go to the home page: travisbikesamerica.com)

Lastly, here are a few observations, that never made it into the blog:

Baseball is still America’s pastime — we rode through dozens of small towns and virtually every one of them had a baseball field.  Maybe it was only chicken wire and some two-by-fours, but there was always a place to play.  On the other hand, we saw relatively few football fields — though the ones we saw were pretty nice.

Red-winged blackbirds hate me — at least a dozen times, I got stalked by red-winged blackbirds.  They’re very pretty but — apparently – very territorial.  Every time I entered one’s territory, it would scramble to the defense — zooming at me and flying about ten feet above my head while squawking loudly.  I was never able to make peace with them.

Loco is actually pretty funny — I like Loco a lot but I always thought of him as a rather dour data dude.  On several occasions, however, I actually thought his blog was funnier than mine.  I especially like his insightful observation that there’s no I in curmudgeon. That gives me a new standard to live up to.

Cars aren’t the problem — I did a rough calculation of the leading causes of lost rider-days (one rider, one day lost).  The leading cause seemed to be saddle sores and — 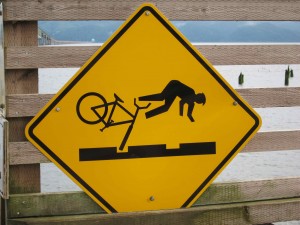 interestingly — the men did much worse than the women.  Does this mean women are smarter than we are or do they just have iron bums?  The second leading cause was loss-of-control accidents — largely caused by gravel, grates, cracks, or edges.  A rider would lose control, fall, and — at the very least — get some road rash.  This was the only type of accident that caused a rider to drop out — due to a broken collar bone. The third leading cause was riders bumping into each other.  Riding in a peloton requires a lot of concentration, which is why I didn’t do it very often — my mind just wanders too much. Interestingly, none of our accidents involved a motor vehicle.  More interestingly — of the 35 riders who started in Oregon intending to do the trans-continental — 34 of us made it. That’s pretty cool.

So what’s the next big adventure?  Well, for the time being, it’s pumping up my persuasive communication business (traviswhitecommunications.com), teaching two courses at the University of Denver, volunteering at the National MS Society, and staying away from red-winged blackbirds.