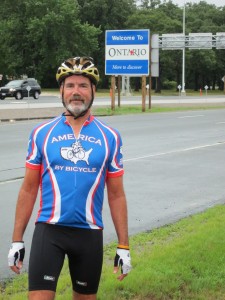 At 5:00 AM, it looked like we would have a miserable day today.  We were in the midst of a major thunderstorm, a huge sound and light show accompanied by torrential rain. Wait… I wrote that yesterday … is time repeating itself?  Is this Groundhog Day all over again.  Am I having déja vú and amnesia at the same time? … Today was a virtual replica of yesterday.  Miserable weather overnight and then the rain stopped just half an hour or so before we departed.  The clouds stayed and kept us cool and a bit damp.  All in all, nice riding weather as we zipped through Ontario.

Of course, the big news today is that nous sommes au Canada aujourd’hui et demain.  We entered via the Blue Water Bridge.  There’s no bike lane on the bridge so the authorities closed the entire U.S.-to-Canada span and gave us an escort as we rode across.  It was quite the treatment.  It’s a good thing we studied up on our Canadian history because the border guards gave us a pop quiz.  Who’s the prime minister? (Stephen Harper).  Why is it called Canada? (Named after the Kanata Indians). What’s the largest province by area?  (Nunavut). What’s the best baseball team in Canada?  (Toronto Blue Jays). Name the original six teams in the NHL.  (Boston, Chicago, Detroit, Montreal, New York, Toronto).  We were ready … and only had to consult Google once.  I’m glad we passed; I’m not sure we would have gotten in otherwise.

So far, Canada has been great.  We rode quickly this morning because rain seemed 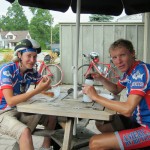 imminent (just like yesterday).  Around noon, however, the skies began to clear and we started to stop and smell the roses.  In the little town of Delaware, Ontario, we stopped at BJ’s Deli — a lovely little spot — and had fresh made sandwiches and home made ice cream.  After chowing down on Heavenly Hash ice cream (highly recommended), I rode the rest of the afternoon with Science Mary and Cap’n Blythe.  They wore me out, so I’m going to take a short nap and then soak in the hot tub.  Anyone want to join me, eh?