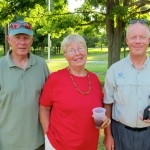 Today being a rest day, a lot of friends and family joined us in Niagara.  (Suellen will join us next Sunday in New Hampshire for the finale).  Tops on the list were Gail and Chuck Berthe, the Locomotive’s Mom and Dad.  Chuck is a former Naval aviator who has built two airplanes of his own. Chuck and Gail flew from their home in Georgia in a single-engine, two-seat aerobatic plane that Chuck built some years ago.  That’s pretty cool but even better is the fact that Gail brought home made cookies. Chuck, who is 80 years old, still bicycles 4,000 to 5,000 miles a year.  He’s also an ace mechanic so Chuck, Loco, and I spent a good portion of the morning futzing with our bikes.  I now have a new chain, new tubes, and new tires.

Also joining us was Diane, Columbus Dan’s wife of two months.  Can you believe this — they got married on May 29 and Dan left almost immediately for this trip.  Fortunately, Diane has been able to join us at several points along the way.  The two of them joined Loco, Gail, Chuck, and me for dinner last night at a very nice restaurant overlooking the Niagara escarpment. 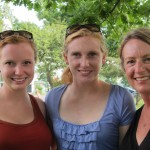 Also joining us were Maggie and Adair, Carolina Julie’s two teenage daughters.  Julie started the trip in Oregon with her husband Chuck, a doctor who wound up treating most of the butt blisters during the first weeks of the ride.  (He also removed the stitches from my shoulder — much to Suellen’s 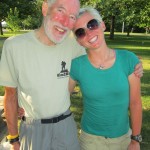 relief). Unfortunately, Chuck could only stay for the first two legs of the trip and then flew back home to North Carolina — partially to go back to work and partially to look after the girls.  Today the girls were with us; they’re a delightful pair and they immediately bonded with Lucy. 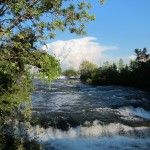 Loco’s Mom, Gail, organized a picnic for all of us — including Tucson Terry and Hustle Russell — on Goat Island.  I must say that Goat Island dramatically improved my opinion of the Niagara Falls area.  It’s within walking distance of downtown but it’s completely undeveloped.  No shops, no barkers, no t-shirts — just trees, lawns, black squirrels, and 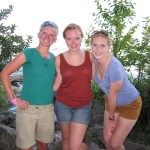 white birds — very pretty, very bucolic, and a lovely place to eat, chat, and relax.  Many kudos to Gail for organizing a delightful meal from Wegman’s — the best grocery store in New York — and for getting us all to the right place at the right time.

Tomorrow it’s back to work for the last week.  We’ve passed a number of milestones in the past few days: